On this day in particular,

when rainbow flags are festooned on every lampost, on every corner, and perhaps, in every heart, I cannot ignore the recent passing of my old friend, B. J. Perichon, better known as Baby Jery, who went down to Washington D.C. about forty years ago and spent his last three hundred dollars to patent his idea of a rainbow American flag. Jery wasn’t thinking of a gay flag or even an American flag. He was thinking of a flag that united all peoples, just as the annual Rainbow Tribe gatherings that he attended had become the only family he ever really had.

The son of a Mexican oil executive and a French woman, Jery, was born in 1940. and recalled the color of the Nazi uniforms in Paris when he was a small child. He was put up for adoption, and he must have had a difficult childhood. He discovered that he was an artist, though, and by 1962, he was doing street portraits at the Seattle Worlds Fair. A few years later, he was in New York, drawing his fantastic images for the legendary underground newspapers of the sixties.

When I first met Jery, in 1976, he was living with six parrots and a cockatoo in an old stable across the street from the Hess gas station on Forty-Fourth Street and Tenth Avenue. The bi-centennial celebration was at hand, and Jery was working furiously on his magnum opus, a book about the founding of the United States, called “A Patriot’s Guide To Silence.” As far as I know, the book was never completed, but Jery continued to ink away through years of homelessness and illness, right up until his very last days.

Jery was a visionary, and he was often obstinate in his stance, but because he was a master of ink and brush, he found employment at the New York Times art department in the seventies and eighties. It was a well-known fact that Jery had to be carefully guided, lest he veers off into worlds unknown and unimaginable. One of the art directors told me that “if left to his own devices, he will bring in naked Indians with peace signs every time.”

Sure enough, one Friday afternoon, as the deadline for the Sunday Time’s Week In Review approached, the art director called me into his office and asked for a favor. “We’re waiting for Jery, and he isn’t answering his phone. It’s getting late, so would you just walk over there and see if he’s okay?” I hurried across Forty-Fourth Street, but when I pounded on the familiar blue door, there was no answer. Now I was really worried, and I had to return to the Art Department with no Baby Jery.

When I arrived on the ninth floor, there was a large crowd overflowing the little cubbyhole office of the art director, and I did the best I could to get a look inside. There was Jery, displaying his illustration for a story called  “The Blind Leading the Blind” and the entire staff seemed to be looking at it with the same expression. Their jaws were hanging open, because sure enough, it was a drawing of naked Indians with peace signs, except that “the blind” ones had had their eyes plucked out. Needless to say, the dripping, bloody eye sockets were not deemed appropriate for the Sunday paper.

I didn’t realize that Jery was having none of it. He told me that he didn’t want to sell out, or whatever, by pandering to any more art directors, but I dragged him to the lobby of the Washington Post, and left him there with my brand new leather portfolios, as I carried a load of Washington Stars up to the Art Department with the specific instructions that he waits there until I returned.

No one at the Washington Post had been able to get any copies of the sold-out Final Edition of the Washington Star that morning, and so everyone I knew happily agreed to look at the work of B. J. Perichon in return for a nice new copy. When I returned to the lobby, happy to tell jery that he was welcome upstairs, he was gone, and my two leather portfolios were leaning up against the wall, beside an elevator door.

When Jery was evicted from the stable on Forty-Fourth street, we all helped him pack, but he would never have a real studio, or a real home, again. Steve Stollman, who had a place at 49 Mulberry s/treet, was Jery’s greatest friend and benefactor, and Steve even gave Jery a place to stay for years. In 2018, Steve’s Mulberry Gang show featured some of the extraordinary drawings of G. M. Perichon.

Jery had a vision, and he struggled mightily to bring it forth. His work was magnificent, and all he wanted for this world was a rainbow of peace and love. He shouldn’t have been homeless, and impoverished, because as someone who had no family, he understood that we are all family. 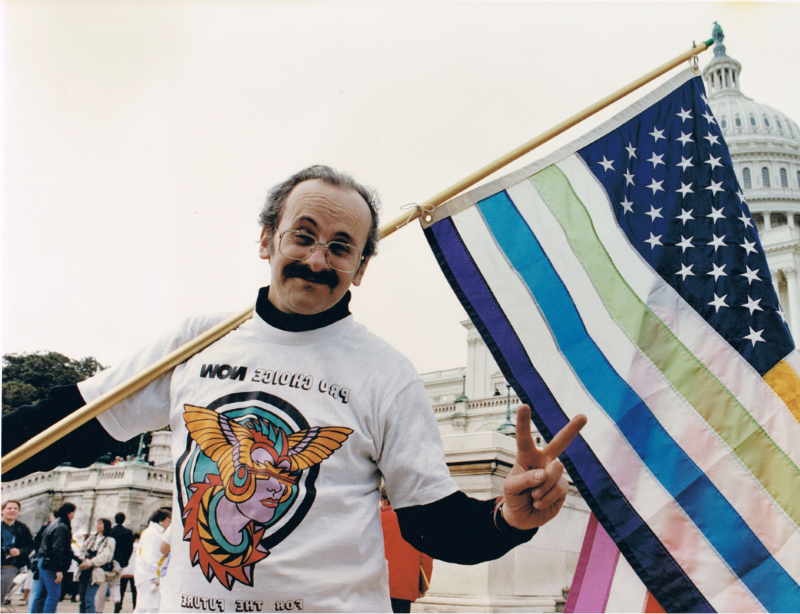